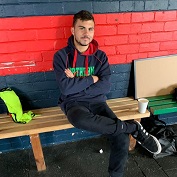 Thomas has captained the past 2 Under 19 teams to consecutive grand finals, unfortunately coming up short. He was a huge part of the Under 17’s Premiership in 2017, and has played a few senior games through recent years.
Tom was having an outstanding preseason, before it stopped, being one of the leaders of the club.

Nickname and why? Kosy, part of my surname
Preferred position? Midfield
Weird rituals before or during a match? Touch the top of the door on the way out of the changeroom
Favourite ever AFL footballer and why? Chris Judd, hardest worker
Biggest influence on your football so far? Geoff English/ Peter Lohner
Favourite football memory? Winning an u17’s grand final
Best player you’ve played with and against? With: Ryan Lofaro. Against: Kamen Ogilvie
Funniest team mate? Nick Bruno
Most annoying team mate? Bennardo
Most reliable team mate? Petrocco
Smartest team mate? Stefan valensisi
Name the one team mate least likely to pay when eating out? Jase
Favourite past time/hobby? Footy
Favourite band/musician? Rufus du sol
Celebrity crush? Mila Kunis
3 people you would invite to a private dinner, dead or alive? Warrick Capper, Donald Trump, Kanye West
What you miss most about not being able to play footy? Not being able to see everybody