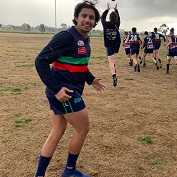 Musa is one of those rare sportspeople, that are good at just about everything they do. He is also working his way up the ranks in Premier Cricket with Essendon Cricket Club, and had quite the season in 2019 for the Northern Saints, not only finishing third in the Under 17’s Best and Fairest, but also playing a key role in the Under 19’s team that played off in the grand final, winning best finals player for that cameo.

Nickname and why? S.O.H (son of horse) Kouta - play like him and Rolls Royce cos the prez says so 🤷🏽‍♂️
Preferred position? Midfield - full forward iso
Weird rituals before or during a match? Shave legs night before game and wear most comfortable undies game day
Favourite ever AFL footballer and why? Kouta- loves his athleticism and made the game look so easy
Biggest influence on your football so far? It’s made me prove that Indians can play
Favourite football memory? Kicking a goal from the boundary at windy hill to go on to win the game by 1 in an EF
Best player you’ve played with and against? Saeed Abdul Wahed
Funniest team mate? Tom Kosmak
Most annoying team mate? Yaya Elmi
Most reliable team mate? Sammy Kosmak
Smartest team mate? Aidan Lunardi
Name the one team mate least likely to pay when eating out? Sammy Kosmak
Favourite past time/hobby? Netflix
Favourite band/musician? Kygo
Celebrity crush? Jessica Alba
3 people you would invite to a private dinner, dead or alive? Jessica Alba, Margot Robbie and Russell Dowling
What you miss most about not being able to play footy? The parents and spectators cheering you on