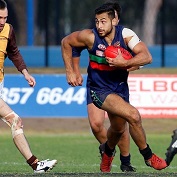 Moey took the Northern Saints community by storm, bursting on to the scene as a 17 year old and capping off a fantastic 2013, by being part of our first and only Senior Premiership. A humble and wise young gentleman, Mohamed can play anywhere, and it is a well known fact Richmond FC superstar Dustin Martin 4 modelled his ‘don’t argues’ on Mohamed’s signature move, spending hours watching videos of Mohamed embarrassing his Essendon District Football League opponents.

Nickname and why? Moe, simple & cute
Preferred position? Mid
Weird rituals before or during a match? Saying my goodbyes before going into battle
Favourite ever AFL footballer and why? Bachar Houli , the influence he’s had on younger Australian Muslim’s and paving the way for other Australia Muslims to play AFL.
Biggest influence on your football so far? Myself, thank you for all that you’ve done bro
Favourite football memory? Winning the 2013 grand final with my brothers from Northern Saints
Best player you’ve played with and against? With - Fort Caruso. Against - Adam Saad
Funniest team mate? Dougy the satle
Most annoying team mate? Dougy the satle
Most reliable team mate? Peteyyy Dispenzaaa
Smartest team mate? Ever? Nat Caruso Currently? Am I allowed to say me?
Name the one team mate least likely to pay when eating out? Abdul Taleb
Favourite past time/hobby? Walking down by the beach, hearing the splashing of waves, the ocean ever so peaceful, the distant people in the background while I stand there and gaze into the sunset. Alas, something will demand my attention and so I would turn away hoping it won’t be my last.
Favourite band/musician? J Cole
Celebrity crush? Demi Lovato
3 people you would invite to a private dinner, dead or alive? Gary Vaynerchuck, Mark Manson & J Cole
What you miss most about not being able to play footy? Giving don’t argues... man I miss that, got a lot to make up for when it’s back.