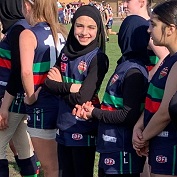 Fatima Saad (under 15 girls team)
Fatima had an outstanding first year for the Northern Saints, earning herself a coaches award, along with cousin Emna. Despite being far smaller and younger than most of her teammates and opposition, Fatima never let that hold her back, showing courage and determination all season. A crafty little player, Fatima game shows plenty of upside as she continues to develop her game and confidence.

Nickname and why? No nickname.... yet
Preferred position? Wing
Weird rituals before or during a match? A pep talk with Dad
Favourite ever AFL/W footballer and why? Cripps, he’s a machine and good looking, and Darcy Vescio
Biggest influence on your football so far? My Dad
Favourite football memory? Kicking my first goal
Best player you’ve played with and against? Jamilah
Funniest team mate? They’re all funny
Most annoying team mate? All of them
Most reliable team mate? All of them, we are a team ☺️😇
Smartest team mate? All of them 🙄
Favourite past time/hobby? Footy and athletics
Favourite band/musician? Why Don’t We
Celebrity crush? Patrick Cripps and Zac Fisher
3 people you would invite to a private dinner, dead or alive? Cripps, Fisher and Jack Silvagni
What you miss most about not being able to play footy? The whole team and our great coach