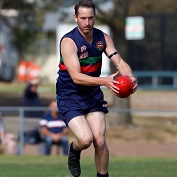 Recently inducted Northern Saints Life Member, Chris Sankovic, apart from a couple years away, has been a mainstay of Northern Saints since it’s inception, and prior back at North Coburg. A great clubman, and reliable defender, Sanka is known for his discipline and his team first approach. The veteran was ready for another huge season down back for the Saints.

Nickname and why? Sanka - surname and 3 votes thanks to Joey Knight
Preferred position? Half back
Weird rituals before or during a match? Talking
Favourite ever AFL footballer and why? Gary Ablett Jr, why no reason
Biggest influence on your football so far? Family and friends
Favourite football memory? Knocking off Roxburgh Park by a 1pt back in 2017
Best player you’ve played with and against? With? Adrian Luvara - the BOPS days. Against? None, I respect all my opponents
Funniest team mate? Daniel Berryman (South Morang)
Most annoying team mate? Call Shutters (another from South Morang)
Most reliable team mate? Joey Knight
Smartest team mate? None -they like to think they are smart
Name the one team mate least likely to pay when eating out? Matt Clarke
Favourite past time/hobby? Anything that gets me out of the house
Favourite band/musician? Don’t have one, anything that has rock or metal
Celebrity crush? Scarlett Johansson
3 people you would invite to a private dinner, dead or alive? Shane Warne, Scarlett Johansson and Mark Wahlberg
What you miss most about not being able to play footy? The drinks after the game with the veteran