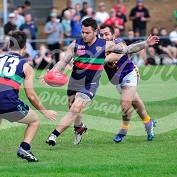 Chris’ family have a long and proud history with football in Fawkner, having grown up with Mutton Reserve as his back yard. Chris, the oldest of 3, is lacing up again in 2020, for his 28th comeback to date, second only to John Farnham in total number of retirements/comebacks.
Well done Chris. Chris will add reassurance down back, and a wise calm head, having first broken into senior football, with Fawkner Park at just 16. Chris and his brothers also joined committee this year, taking the next steps, to ensure the next generation of Gray’s (Chris’ son Zac) can continue the family tradition for many years to come.

Nickname and why? Foss - because I’m old
Preferred position? Half Back
Weird rituals before or during a match? Try to always run out on the field last.
Favourite ever AFL footballer and why? Matthew Richardson - Just love everything about him, made losing as a child bearable.
Biggest influence on your football so far? My old man - always brutally honest and rain hail or shine watched every game of mine and my brothers careers and kept me grounded. Mick Caruso- first ever coach and won a premiership in my first year hardest I’ve ever trained to this day and it was under 10’s. Says a lot about physical and mental toughness. Terry Young- my longest coach and a bloke who gave me confidence and helped me through some tough times growing up.
Favourite football memory? Playing senior football with my two younger brothers.
Best player you’ve played with and against? With - Fort Caruso. Against - Cam Cloke/ Corey McGrath
Funniest team mate? Travis Potts
Most annoying team mate? Daniel Gray/ Matty Bernardo
Most reliable team mate? Army Abdul Wahed/Billy Allouche/Pete Dispenzeri
Smartest team mate? Dougy Abdul Wahed
Name the one team mate least likely to pay when eating out? Matthew Gray
Favourite past time/hobby? Water Skiing
Favourite band/musician? Foo Fighters
3 people you would invite to a private dinner, dead or alive? Michael Jordan, Will Smith, Jim Jeffreys
Celebrity crush? Pamela Anderson
What you miss most about not being able to play footy? Mateship, training, functions and Glynn’s wisdom at training